When childhood nerve tumors, so-called neuroblastomas, form metastases, they preferentially do so in the bone marrow. A study by St. Anna Children’s Cancer Research Institute shows for the first time the exact cell composition of such metastases. This knowledge forms the basis for the development of therapy concepts that target all individual tumor cell types in a metastasis. The work was published in the scientific journal Cancers. 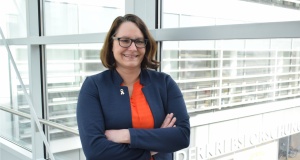 A research team at the St. Anna Children’s Cancer Research Institute (St. Anna CCRI) is for the first time describing the exact composition of the individual cells of bone marrow metastases from a solid tumor at the single-cell level. The study showed that cells that have spread into the bone marrow from childhood nerve tumors, so-called neuroblastomas, have very different properties. The researchers therefore conclude that in order to therapeutically attack all these different tumor cell types, different, combined therapeutic approaches are required. Also cells in the microenvironment of a bone marrow metastasis are likely to play a crucial role. “We identified a cell type that apparently prevents immune cells from fighting the tumor,” explains Dr. Sabine Taschner-Mandl, corresponding study author and Principal Investigator at St. Anna CCRI.

“We use single cell analysis to describe which cell types are present in a bone marrow metastasis compared to healthy bone marrow,” says Daria Lazic, MSc, first author of the study and PhD student in Taschner-Mandl’s group. Using this method, the research team can distinguish not only whether the cell is a neuroblastoma cell or a specific immune or stem cell, but also which molecules or markers they carry on their surface. “These markers, for example GD2 or B7H3, are also used as therapeutic targets. Our study shows that some tumor cells in the bone marrow have a lot of these already known markers, while others have few or none,” adds Lazic.

In addition, the researchers have discovered a completely new marker protein, Fas Apoptotic Inhibitory Molecule 2 (FAIM2). It allows the detection of neuroblastoma cells that were not found with previous markers. Thus, a broader range of different tumor cell variants can be detected. FAIM2 could also serve as a target for future therapies. Immunotherapies have already been developed against GD2 and B7H3.

“However, since these markers are not present on all neuroblastoma cells, we assume that only appropriate combination therapies can attack all individual tumor cells. FAIM2 is a possible target for an additional immunotherapy,” Taschner-Mandl said.

Scanning “saboteurs” in the microenvironment

It is also conceivable for the scientist to include FAIM2 in routine diagnostics in addition to the currently used markers in order to better characterize the tumor. Moreover, it could be relevant to detect also other cells in the tumor microenvironment, so-called “granulocytic myeloid-derived suppressor cells” (G-MDSCs), by means of markers in routine diagnostics. These cells are likely to downregulate the immune response against the tumor, while, according to our data, at the same time an inflammatory response is detected in the metastasized bone marrow samples.

“Our results provide the first evidence that metastatic tumor cells actively remodel their bone marrow microenvironment. We will investigate how relevant this is for the clinic in a follow-up study,” explains Taschner-Mandl.

The researchers investigated 20 cell-specific markers, which were analyzed from eight patient samples. In cooperation with Dr. Christian Ostalecki, Head of the MELC Facility, University Hospital Erlangen, the team used the multiplex imaging method “Multi-Epitope-Ligand Cartography” (MELC), which enables automated antibody staining followed by immunofluorescence microscopy. To screen each cell for its markers, the authors developed a deep-learning-based software for image processing (“DeepFLEX”). The researchers constructed a single-cell atlas of more than 35,000 cells metastasized to the bone marrow, as well as the immune and bone marrow cells in their microenvironment. To support their findings, they additionally sequenced the genes expressed as messenger RNA from samples of 38 patients with and without bone marrow metastases.